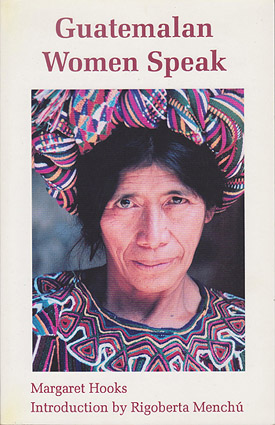 This book is about the lives of Guatemalan women – women who are, on the whole, poor and Indian; women whose voices are seldom heard. Through their stories, we become acquainted with the reality of daily life in their country.

But that is not the principal objective of this book. It is, rather, to break with the way in which Guatemalan women are usually presented – as exotic Mayan Indians in a picturesque setting or as the passive victims of a cruel repression – and to allow the women to become, as one of the women interviewed describes it, “protagonists in our own struggle.”

“[In] Margaret Hooks’ sensitive Guatemalan Women Speak … the noble tradition of oral history has been refined through a particularly perceptive observer. Hooks gives us these women’s voices, and her own intelligent bridge — so we may walk across, offer our hand, take theirs. A must read for all who take seriously the human condition.”
– Margaret Randall, author, poet

“… highlights the multiple dimension of women’s oppression, as well as their increasing protagonism as agents of social change. It is a necessary contribution toward filling a gaping hole in the literature of Guatemala.”
– Susanne Jones, author, The Battle for Guatemala

“The women in this collection of interviews have given so much to this, their book — their stories, their ideas and their trust. They allow us to enter their world and to glimpse the reality of a woman’s life in Guatemala.”
– Rigoberta Menchú, 1992 Nobel Peace Prize winner

Every Sunday, the rather forlorn and slightly tarnished central plaza of Guatemala City takes on the lively air of a colorful Indian market-place. On this, their one day off a week, hundreds of young Indian women wearing their native costumes take over the square. They chat and laugh with their friends, flirt, eat candy floss and roasted corn, and pose for photographs in front of the pale-green National Palace, the scene of countless coups and counter-coups.

The women making the most of this day of freedom work as domestic servants – the occupation of more than one-third of all women wage earners in Guatemala. The majority are Indians of campesina origin and are usually employed as live-in maids, an arrangement which works out cheaper for their employers. Their work is tedious, tiring and demeaning. But for most of these women, coming to work in the capital is the only alternative to a life of extreme poverty in their villages. It can, for example, mean that they manage to get a minimum of education, they will probably learn some Spanish and they will make a little money. They will, however, be in daily contact with a level of racial discrimination that does not exist to the same extent, if at all, in their home village. Working in the capital also often hastens the process of acculturation, whereby ultimately the women do not feel at home either in their own or ladino culture…

Copyright © 2019 Margaret Hooks.
This website and its contents are the copyright of Margaret Hooks and the authors of the images. Any redistribution or reproduction of part or all of the content in any form is prohibited without the express written permission of the copyright holders. It should not be transmitted or stored in any other website or other form of electronic retrieval system.